Maybe you just bought your new electronic drumset and you finally can play them in your apartment without unnecessary conflicts with your neighbors. Or you are just wondering which are the best options out there.

Now the question is: „which drumsticks should I use?“ as they usually don't come as part of the kit.

There is a little to no difference between drumsticks used on a regular acoustic drumset and an electronic set but still, you should keep 2 things in mind:

Among the variety of sticks on the market, here are the best options: 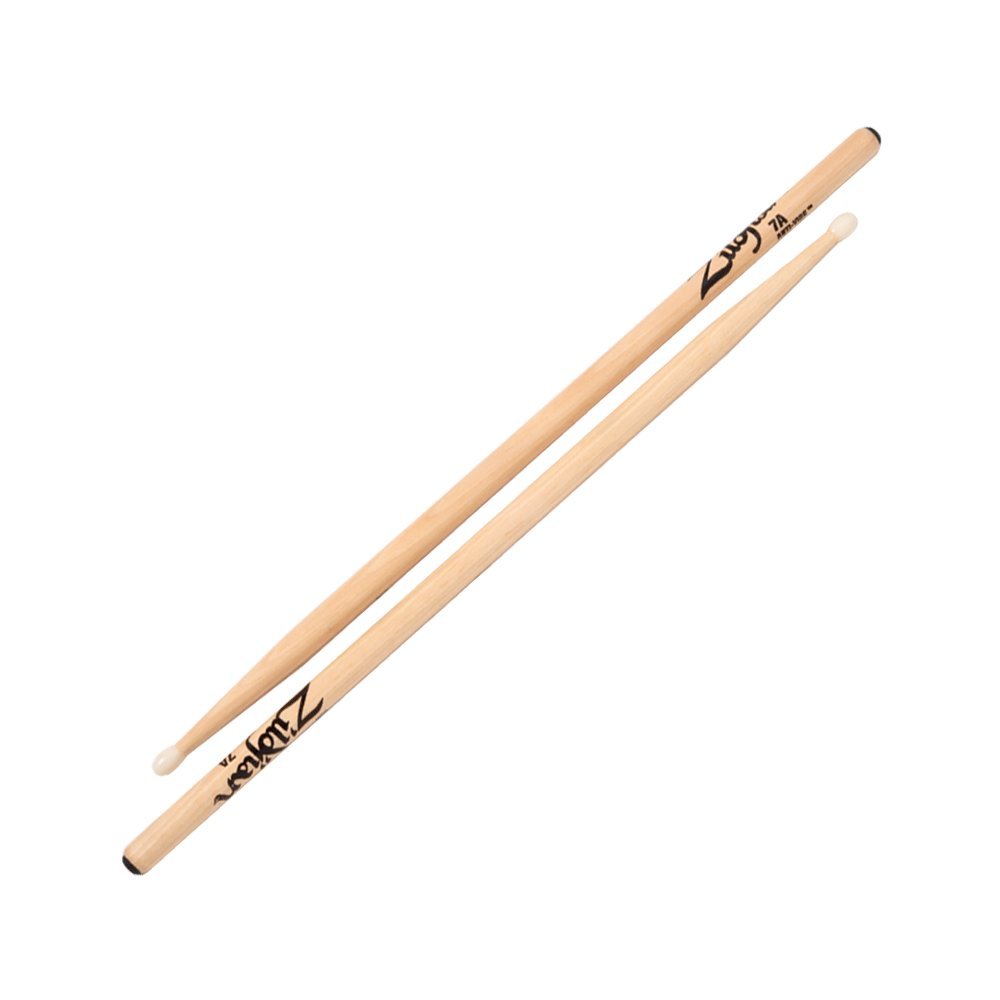 The anti-vibe series is an innovation made to reduce the vibration of the stick in your hand. They achieved that by putting a few inches long piece of rubber on the back of the drumsticks. This sticks should be more comfortable to play with but in the end, it's completely up to you if you like this design better than the standard sticks.

Zildjian chose hickory to make this stick of and the tip is made of nylon.

7A anti-vibe will be ideal for people who play a lot. They are 15.5“ long and 0.520“ thick which makes them shorter, thinner and lighter than most drumsticks on the market which soft player will enjoy playing while heavy hitters could be disappointed. But don't stress because Zildjian makes the same series in 5A and 5B models, so most drummers will find the one that suits them the most.

The idea behind this design is to create a drumstick specially for playing electronic drums, and at the same time to able to behave well on a regular acoustic drumset.

The designer explained how he was inspired by Vic Firth 5a and 5a extreme models. The final result is a stick with similar dimensions like the 5a extreme but with a long taper (the part under the tip of the stick is thinner) which lowers its weight. This way the stick has a different balance allowing the stick to bounce back much faster than a 5a extreme. This is something heavy hitters won't appreciate, but since you are playing an electronic kit, more volume means turning up the volume knob and not hitting harder.

Another particularity of the ESTICK is the tip. It's shaped like some vintage drumstick models where. It's wider, so it has a wider area of contact with a drum pad which in theory allow electronic drum triggers to perform better than they would under regular sticks.

Overall, these sticks are longer and a little bit lighter than the standard 5a allowing more reach and faster playing. They are definitely a good choice! 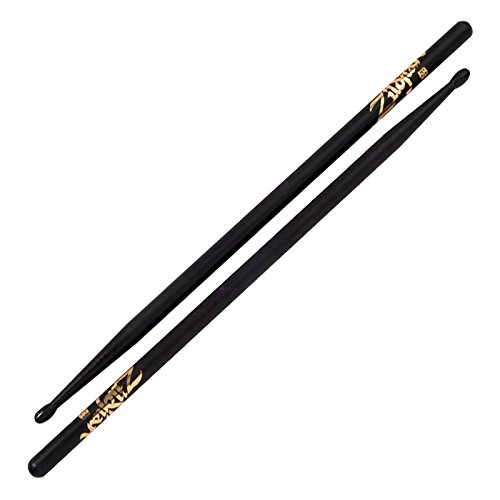 Another great pair of drumsticks by Zildjian. This pair is actually not much different from any other well-known drumstick company which makes the 5B nylon tip model, but aesthetically they look pretty nice. Colored in black with gold letters.

Maybe the worst thing about them is the gold letters. For some reason, they scratch off too fast. But that's normal since they put letters right in the place where you grip the stick. On the positive side maybe that's a good measure to see if you practice enough. Here is a simple rule of thumb. Who has all the letters intact, should definitely practice more.

5B is one of the most popular models. They are a little bit thicker but still light enough to allow a lot of control for players and especially for beginners which don't feel comfortable handling a thinner drumstick.

Maybe not the most ideal stick for players with a light touch, but still there are a lot of pro drummers using them in every music style.

The nylon teardrop-shaped tip is also black which is a nice touch.

Overall, this is a really good pair of sticks in both, visual and performance aspects. 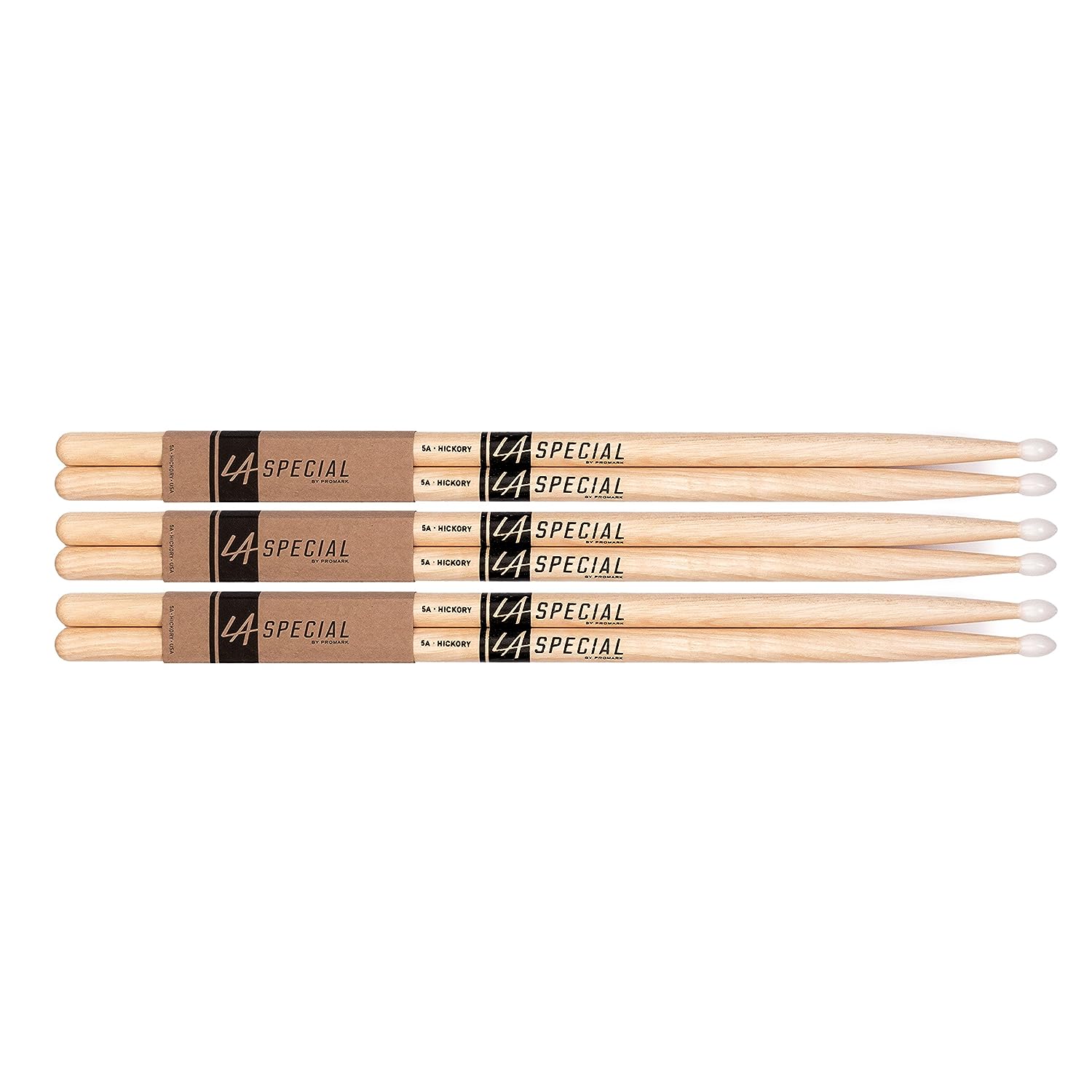 Promark is a renown drumstick maker. Many famous drummers use them. If they weren't satisfied with their sticks, they would surely change them.

Well, LA Specials are made under the Promarks signature but are not actually made with the same standards and quality control like the real Promark sticks are. That doesn't mean they are bad. They lack the professional grade quality, probably aren't weight matched and the wood quality is not the best it could be, but they are still good enough to play and practice with them. They are perfect for playing on an electronic kit as you don't need to hit hard if you want to play loud, so it should be pretty hard to break them. Another problem, most lower quality drumsticks have, is fast chipping while playing the hihat on the edge of the hats, something that most rock, punk and metal drummers do. This is not a problem when playing an electronic drumset since the hats are pads or rubber cymbals without sharp edges.

These are semi-professional drumsticks. You can't expect the same kind of performance like you would from professional ones, but keep in mind that they will not behave the same way on an electronic kit as they do on an acoustic kit.

Overall, you get a good pair for just a fraction of the price of professional ones. A pro drummer will always spend a few bucks more to buy betters sticks, but these will do the work just fine if you don't play on a high level. 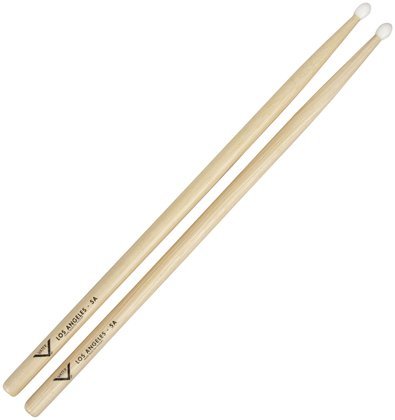 Vater is a well-known brand in the world of sticks. Not to say other brands are not good, but for many drummers, Vater is the go-to choice.

The VH5AN model is a standard 5A drumstick made of hickory with a nylon tip. It's 16“ long and the grip 0.57“ thick. Has a nice balance, but heavier towards the tip. This gives the stick the right amount of precision and helps the stick rebound from the pad really easy. It's suitable for players with a lighter touch, but a heavy hitter will have a great time playing with them as well.

This model doesn't have any drawbacks. Vater is a great brand. Sticks are durable and easy to play with. They leave a great feeling while playing and comparing them with other professional brands, they are priced about the same as the others.

Overall, the best on the market.

While every drummer has a different style of playing, hand size, arm length, etc, he will also need specially designed drumsticks that will fit his needs.

Those drummers will need to spend more money to buy different kinds of sticks, try them in various settings, play them live, in a studio or simply during home practice. Testing is the name of the game. For instance if you never played with glow sticks you might be interested in checking our guide on the best light up drum sticks, they might look to fancy, but hey don't ignore the new experiences.

Like shoes, there is not one size, one design, one purpose.

Drumstick brands know this, so they make products with different specs like a different length, thickness, weight, material and much more. But there are few models which will fit most drummers needs: 5A, 5B and 7A.

Those are the standard models.

Surely one of this model will fit you well, just find which one. Then experiment around this model. Maybe after playing for a while with 7A  sticks, you will realize that you like the weight of the 7A model but you would also like to have the reach you get from your 5As. Then simply find a model of a same or similar weight like the 7As but longer like the Vic Firth 8D model.

Maybe you like the 5A model but you would appreciate if they were thinner. Promark makes an excellent Shira Kashi oak 5A model which are narrower than the hickory models. And so on.

Just keep in mind to buy models with the nylon tip because a wood tip will leave marks on your pads as they do on cymbals or on a nice new clean white coated snare drum batter drumhead. Nylon tip stick leaves marks too but much less.

Here you go. The choice is yours. You can't go wrong with any pro brand drumsticks you will buy. Maybe Vater doesn't have any retailer in the country you live. No problem because Vic Firth, Zildjian or Promark surely didn't miss the chance to place their products on your market or any other way around. You will enjoy them equally.