Pearl has produced shells for over than thirty companies. In the ‘60s, they stopped creating shells for other companies and began manufacturing drums beneath their own name and used the Pearl emblem for the first time. Their construction technique is understood as “Superior Shell Technology” or SST and every piece of Pearl drums feature this type of construction where every ply is placed into a cylinder and pressure is applied from each side. Then the shell, while in the press, is heated to bring the glue to a boil forcing it through the wood grain and fusing the shells very tightly.

Pearl is one of the largest organizations producing drums and equipment and can provide world-class products at competitive prices, together with research and development program that responds quickly to developments and/or changes in the marketplace.

Nathan Jonas Jordison, Joey is an American musician known for his work as the former drummer and co-songwriter for the heavy metal band Slipknot. Joey Jordison played drums in Slipknot since the band was formed in 1995 until his departure from the band in December 2013. He is also a songwriter, record producer, multi-instrumentalist and actor known for Resident Evil (2002), Rollerball (2002) and Fuck (2005).

Joey Jordison Pearl Export drum signature is the ultimate kit for any Slipknot or Joey Jordison fans out there. The Pearl Export 7-Piece Double Bass drum set pays tribute to the amazing drummer of the nu-metal band Slipknot. Built on the legendary Export series, that several of today's notable drummers can tell you that was kit they started on. This amazing set is built for speed and versatility. The expansion of another bass drum, 10" Tom, and second mounted tom meet the exact specifications of Joey Jordison. The ingenious Signature Snare is included. The front bass drum skins are ornamented with the original Slipknot Logo. Featuring 6-ply 7.5mm 100% poplar shells, matching finish wood bass drum hoops, I.S.S. tom mounting system, bridge lugs recessed BD claws.

I have to mention that I personally own this incredible drum set.

Joey Jordison has a reputation as one of the most respected influential drummers in the world. Playing worldwide with Slipknot, he required a snare drum with a lot of strength and higher pitch, and this steel shell power piccolo snare drum delivers the rage and power we expect from Jordison.

The Pearl JJ-1355 Joey Jordison Signature Snare Drum with a 13" x 6,5" 1mm steel shell has the totally full, fat however bright tone of a deep snare. Black Super Hoops and double-ended lugs complement the black shell with Slipknot logos repeated around the exterior. The drum's strainer (SR-017) features a vertical pull action. That is a perfect a snare strings to head contact using minimal tension that leads to superior snare response.

As any other steel snare drum, Joey’s snare is a really versatile drum that fits within a lot of musical genres outside of Metal but if you, for example, need a Rock snare drum, to sound like Whitesnake or AC/DC, this is not the one. You should definitely need auxiliary wooden snare if you want to achieve a certain level of dynamics. 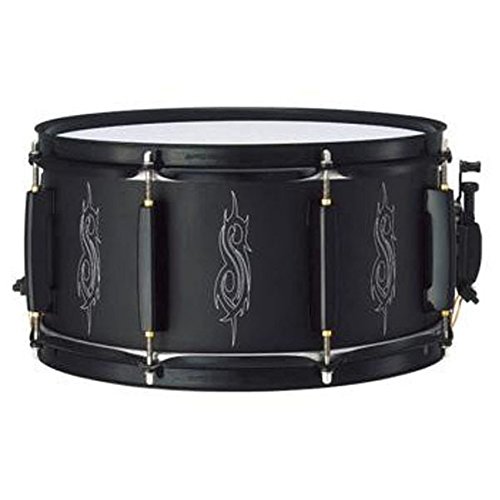 The nice thing about Joey’s snare is having black rims and a black shell that will blend with almost any finish. It ships with a Remo Coated Batter Head which is great, but I think the Remo Powerstroke 3 would be a much better option and would definitely reduce some of the overtones. The diameter (13”) may be weird if you’re used to smashing a 14” snare. Do not forget to check if the snare can safely fit onto your snare stand.

Steel snare drums are just one option drummers have when selecting snare to use. While these drums have qualities that outshine those found in other metal drums or wood drums, they may produce a sound that isn't right for each performance. In general, steel drums have a strong, defined and long tone, so, therefore it is difficult to control the dynamics. In situations where a band or other ensemble wants to turn down the volume and get a soft sound, a steel drum can stick out be overpowering. Every steel snare drum has a thinner shell than a wood one. With less mass, the steel snare will vibrate freely when you hit the drum head, creating an excellent response as a result. Shell of a steel snare drum is very smooth, which lets the sound go up and down the shell surface with less muffling and more ringing. Another “problem” with a steel snare drum is that it can produce a lot of overtones, which causes “bleeding”. This is a major issue in the studio recording because bleeding makes mixing tracks harder to handle. Many drummers notice they have to change their steel drums for a wood one to get a mellower, softer sound and prevent the bleeding effect.

All drums and in fact, most instruments expand and contract slightly in response to changes in the environment, like temperature. With a wood drum, if too little or too much moisture is present in the atmosphere, temperature changes will cause problems such as warping and cracking. A steel drum does not have this problem, and because most steel drums are made of stainless steel.
Anyway, this desirable snare was not designed to appeal to metal drummers and Slipknot "maggots", it is a great snare drum for all.