Drum overheads are important pieces when miking drums. Either you’re recording in a studio, or you’re miking your drums for a live performance, you need those overheads to capture the sound from your cymbals and also to give the whole drums unit a more natural feel.

Here’s where the stands come in: To hold overhead mics, you need tall mic stands that will give you enough room for correct placement above the drums. This article provides you the information you need on the best overhead mic stands you can get.

Here are our reviews of the 7 best overhead mic stands: 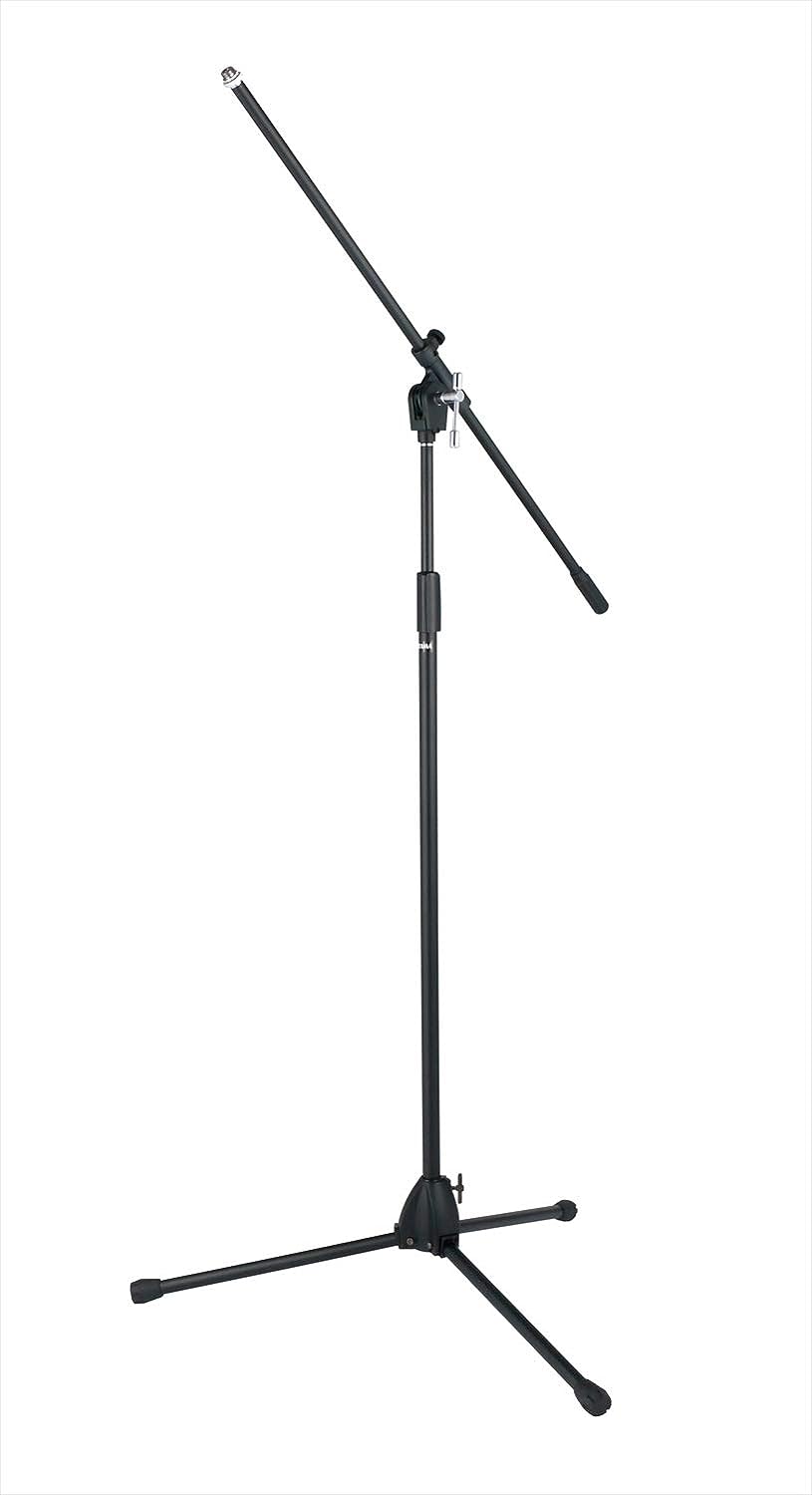 This TAMA stand is a sturdy, rugged one that can serve many needs. It is described as a boom stand, but its capabilities extend well beyond that. At the center of this whole structure lies the very firm cast grip boom tilter. There’s so much grip at the center that once it’s fastened into place, you can be sure that the boom is not sliding off.

Another thing that I found quite impressive with this stand is its balance. Even if you used the whole 26” of the usable boom length, the stand does not tilt forward; whether the boom is tilted upwards or downwards. Additionally, the stands offer a balanced base with rubber tips. These tips help to make sure that the stand doesn’t keep the slide on the floor as a result of vibrations. This can be important when you’re using it as an overhead stand for drums.

The MS205BK weighs 7.1 pounds, and it can be as tall as 63 inches. While the boom length is stated as 32”, only 26 inches can be really used on the active side; the other 6 inches must be behind the boom tilter. Keep this in mind while setting up. 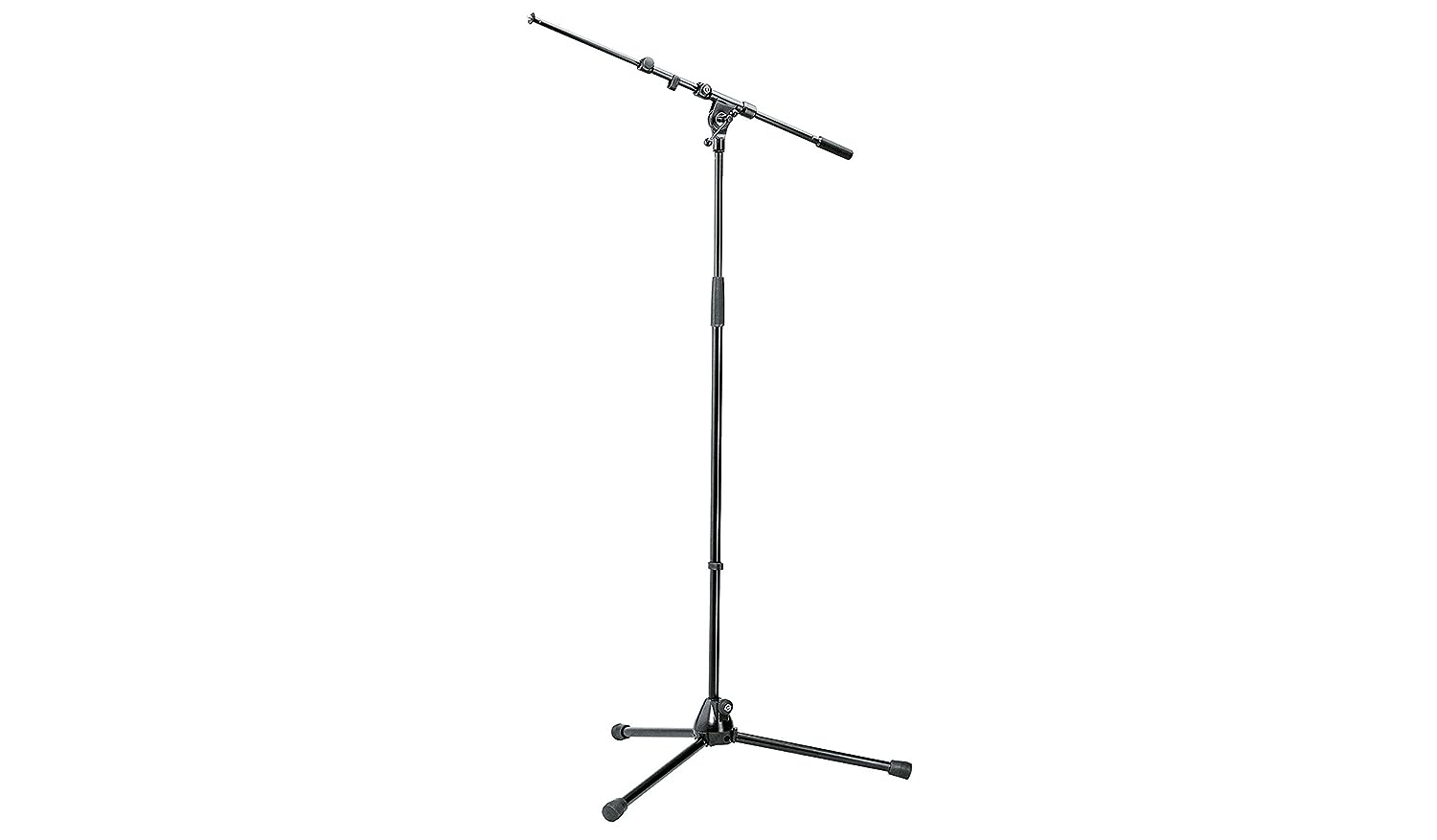 To stand the test of time, there are a few things that a drum overhead must-have. The 21090 ticks all of these boxes. One of the crucial features is the balance. Because most times, overhead mics usually have their boom extended almost all the way, it’s essential that the stand has to be well balanced on its legs.

The other important feature that makes this K & M stand a quality choice is the firmness of all the adjustable parts. Once they are tightened in place, the stay that way until you’re ready to loosen them. Some other stands loosen their grip in the course of performance or concert, mainly because of vibrations of the drum platform and parts. For the 21090, you can be sure that as soon as you lock these parts into place. You’re good to go until the end of the show.

Of course, the boom could be longer than the 301/4” stated, at least to give more freedom during setup. However, this mic stand really represents value for money spent in more ways than one. 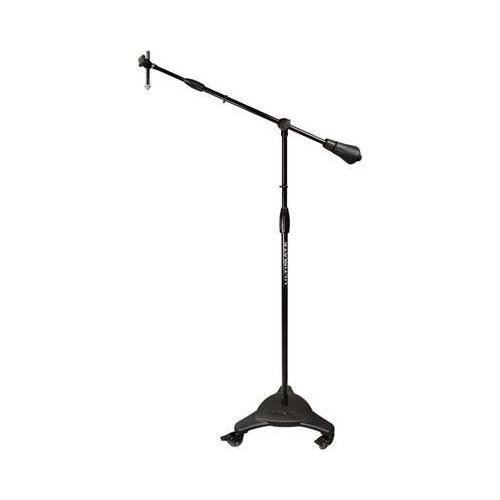 Ultimate Support MC-125 is head and shoulders above many other overhead stands both in design and performance. It is made of heavy gauge steel and coated with black chrome. You can be sure that this mic stand will retain that look years after the first use.
Rather than the common way of changing the height of most stands, the MC-125 gives you a much easier quarter turn. All you need to do is turn the adjuster through 90 degrees, and it’s loose. Adjust the height and turn it back through the same quarter turn and it locks back. It’s so much better than turning it all the way around, plus you don’t need so much muscle to do it.

The clutch mechanism that adjusts the boom is also impressive. With one single knob, you can loosen the boom to slide it up and down, turn it through an angle and tilt it up and down. You can also change its direction with this one knob. It makes the set up a whole lot easier.
Lastly, the base has rollerblade wheels, which is good because the MC-125 is quite weighty. Once you have the stand in position, you can apply the brakes to keep the wheels at the spot.

Of course, with this mic stand, be prepared to do some work if you wish to move it around a lot. The base is not collapsible, so you’ll need some room. 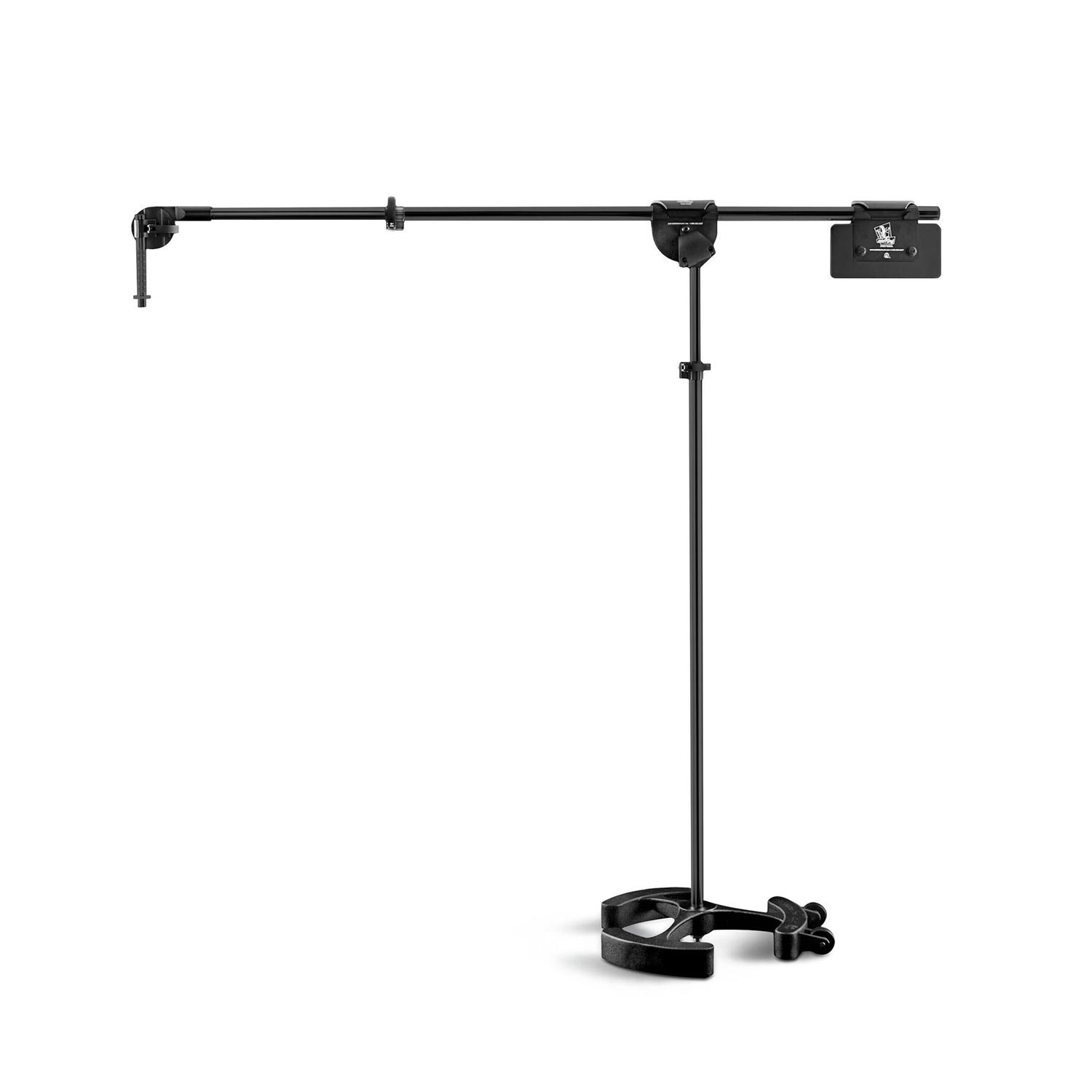 MicKing 2200 is another unique overhead mic stand. With this stand Latch Lake just showed that all gear could be improved in a unique way; even something as basic as a mic stand. The lever control feature is one cool thing that I’ve noticed with this stand. To adjust the height, you simply have to flip the lever control, and the stand looses, giving you full control. Even though it’s a lever, it gives you varying levels of tension, so you can control how tight or loose it gets, though most people want it very tight. To have it tight, you don’t need to exert so much force; just lock the lever into place, and you’re good.

This lever control is also used to adjust the boom length. Also, you can adjust it from behind; you don’t need to hold it in place with your other hand while adjusting. This is because even when it’s loose, it holds itself in place.

The base is designed to hold the weight of the stand and whatever mic you decide to attach. It is designed such that the outer perimeter carries most of the weight. This means that t5he mic stand has a sturdy balance while taking less floor space. This can be quite useful for smaller live stages. The counterweight also helps to keep the boom balanced.

However, when moving this stand around, you may need a little more room, because its base is not foldable. 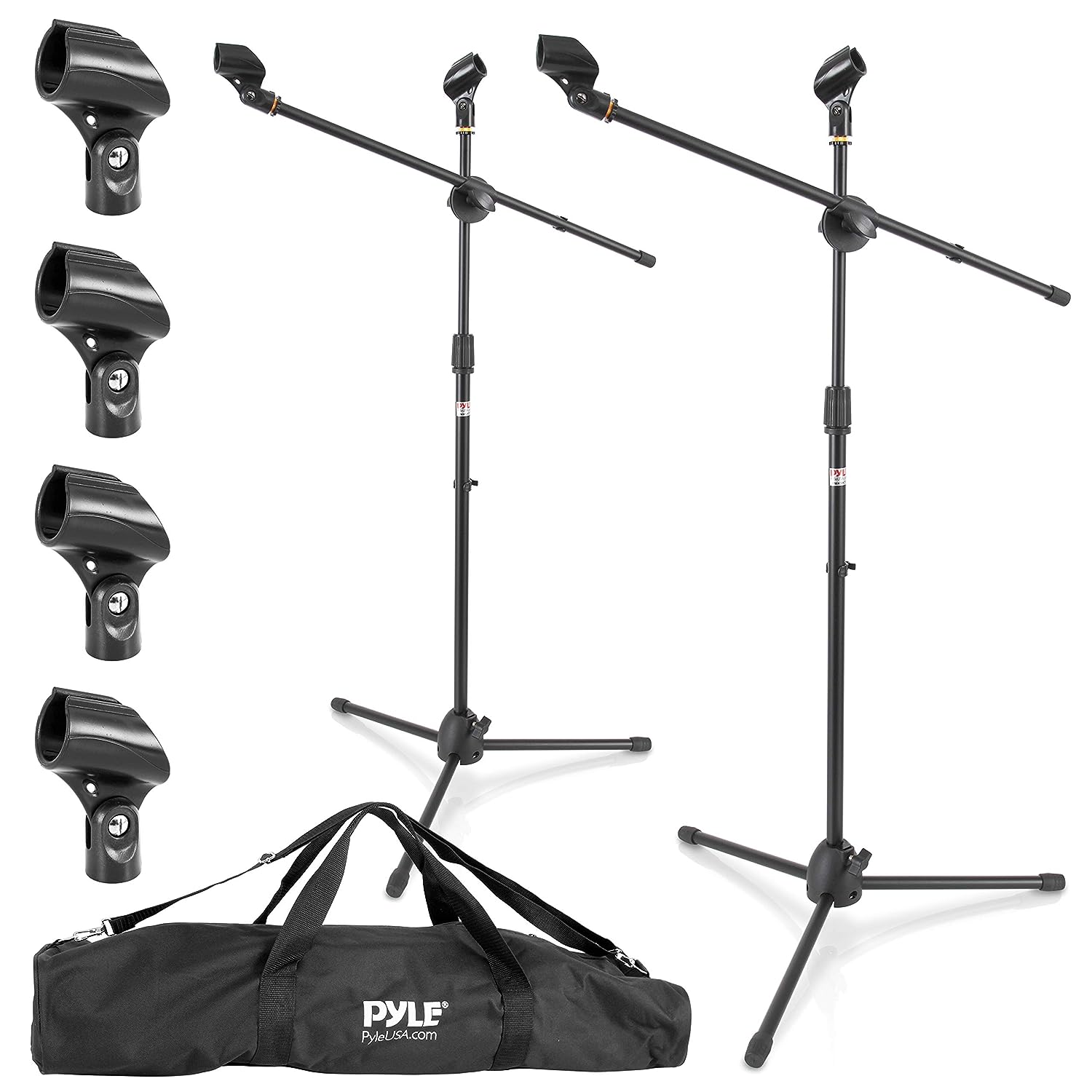 This mic stand comes in pairs. It can be a good pick for musicians and engineers that move around a lot. There are two reasons for this: First, almost every part of this stand is collapsible into a more portable size. The tripod base can be reduced into a straight form to align with the rest of the stand.

Also, this stand can be used for different purposes. The adjustable height ends in a top that you can attach a mic holder to. This means that you can use it as a drum overhead, as well as a singer’s mic stand. This is a good thing if you don’t have a lot of space, either in your studio or on your tour bus.

However, this versatility comes at a price. Using this mic on stage, it has a somewhat clumsy look because the vertical parts extend beyond the control. Also, you may have the mic tipping over or close to that, when you attach a heavy mic at the end, especially when it is tilted downwards. It works much better with smaller or medium-sized mics. 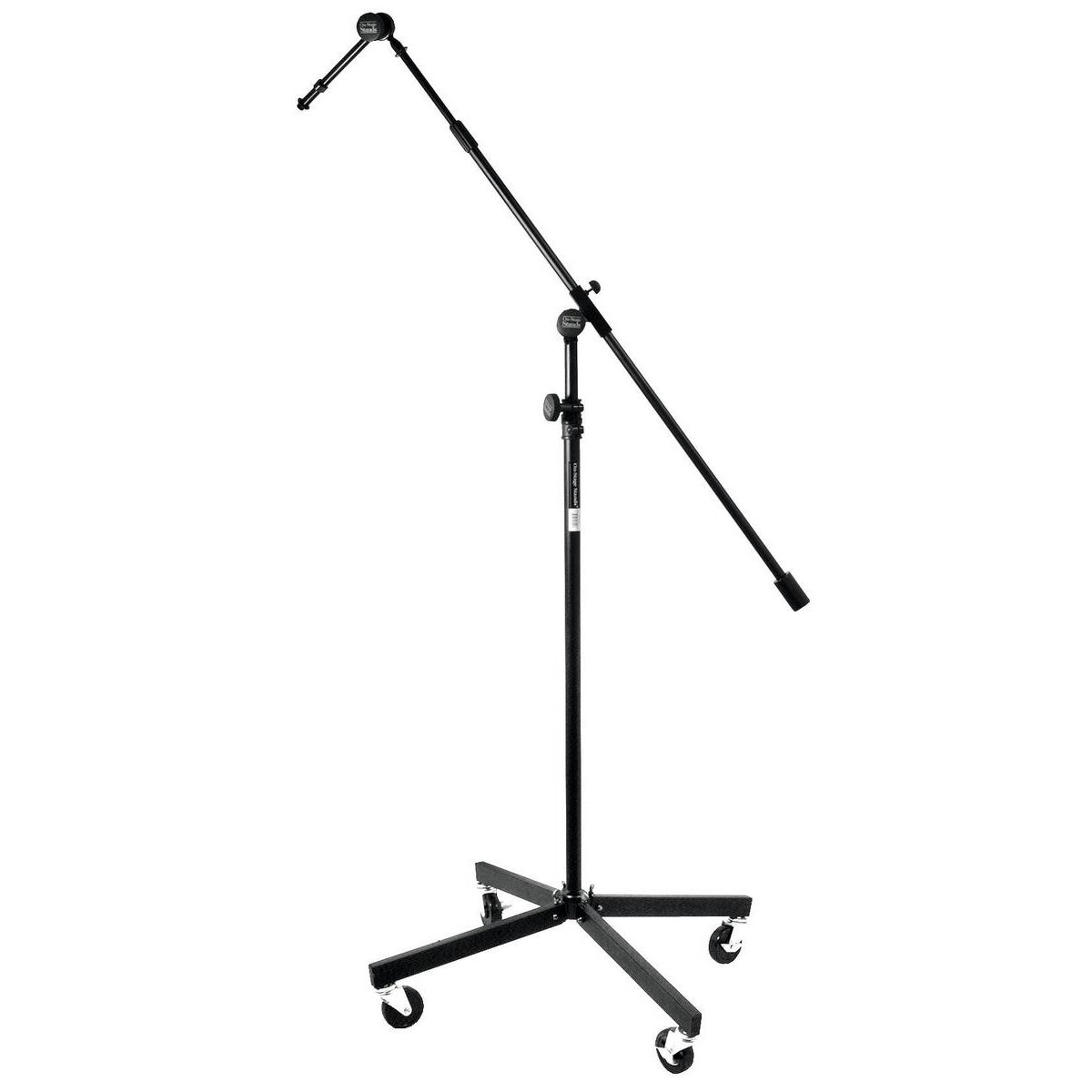 If you’re looking for an overhead stand that you can place some distance away from the source, the SB96+ will be a good choice. Its uniqueness lies mostly in its length. The vertical shaft can be up to 76 inches tall while the boom arm can extend as far as 79”. There is a counterweight added to keep it from tipping over when you’re using it with such extended length.

It stands on four wheels which can be locked into place. With the locks in place, the wheels stay put, but if anyone bumps into them accidentally, they will slide a bit. Because the base uses four legs rather than the popular tripod, it can be an issue of the floor is not quite level horizontally. One or two legs may not be balanced; hence, the stand may wobble. All adjustment points are fitted with easy control knobs that make the setup pretty straightforward. 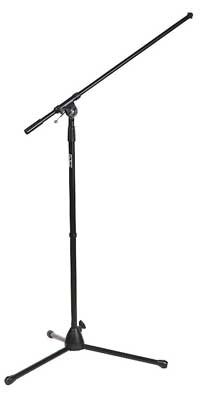 The MS7701B is one of the few solid overhead stands that you can get for less than $100. It’s also quite a tall mic stand; you can adjust its height to about 61 inches. This gives you more room to mic your drums with overheads. Depending on the mic type you use, your overhead mics will pick a wider range and provide a better room representation when they are higher up in placement.

The parts are made of plastic and steel. Even though some important components of this mic stand is plastic, you will use it for a while before you have any issues, and if/when you do, the parts are readily available when you need them.

Vibration from the floor won’t get into the overhead mic because the legs have plastic endcaps that prevent it. You may need to perform routine checks on the nuts and joints of this stand more often because some of them can get a little loose with time.