8 Best Cymbal Packs. For Drummers of Every Level

Around 100 years ago, during the first years of the drum set, the instrument typically had only one or two cymbals. Nowadays it’s common to see drummers with a 3-piece set and two rides, stacks, splashes and more. Mainstream music has evolved in such a way that drummers often require more cymbals than drums to create different textures. This is why we have a variety of cymbal choices at different prices for drummers of every level, to help you get a sound that adjusts to your style. 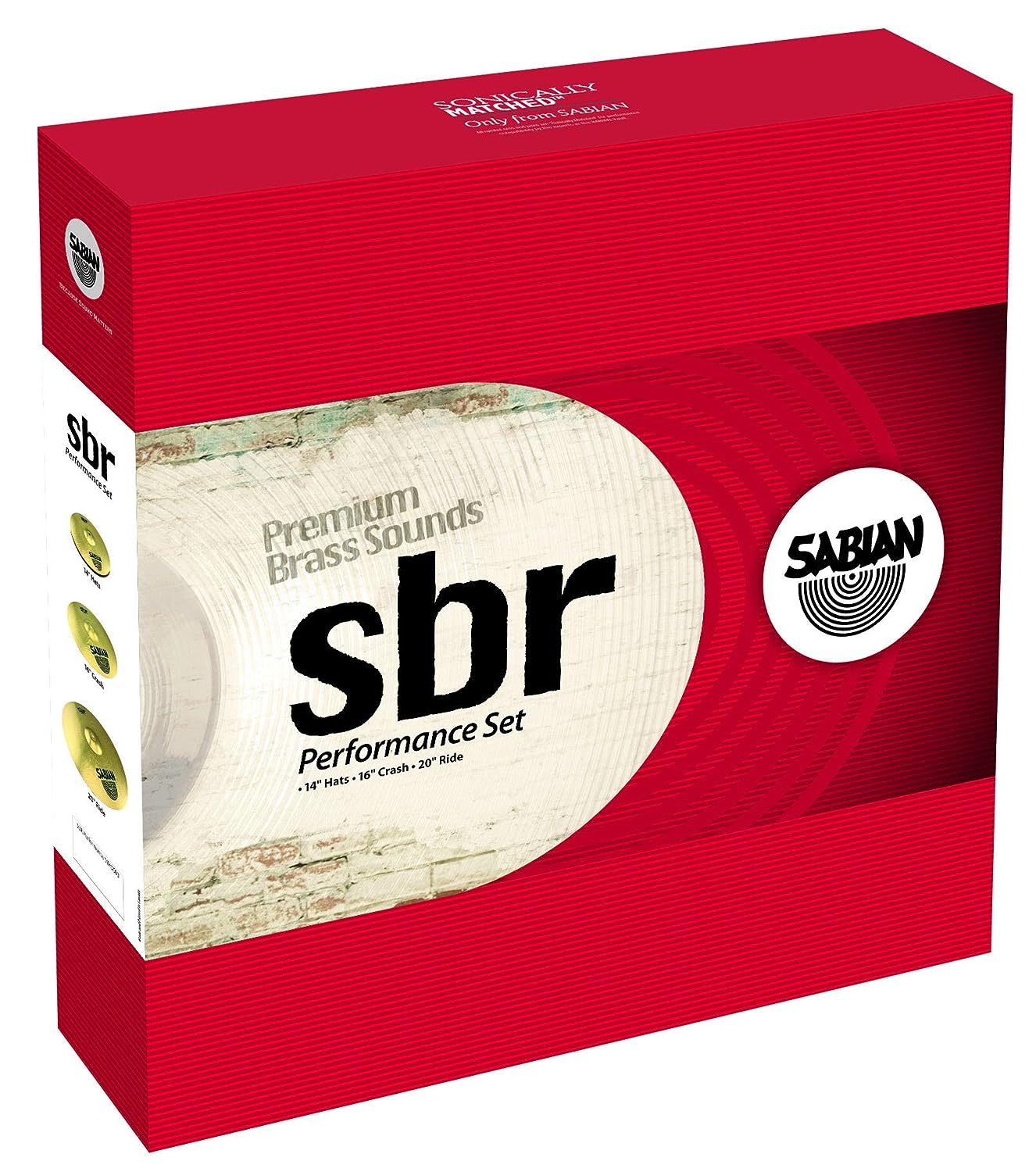 Most cymbal companies have a beginner series made of brass. Meinl has got the HCS, Zildjian has Planet Z, Paiste has the 101 and so on. Many people agree, nonetheless, that Sabian offers one of the most solid options for an entry-level drummer. This is the Sbr performance set, made to be affordable, yet musical.

This box comes with 14” hi-hats, 16” crash and 20” ride, but if you’re looking for a cheaper option, there’s also a set of hats with an 18” crash-ride. This is the one I got when I bought my first drum set, and it’s not even slightly cracked or warped after many years of use. And it’s just right for everything if your kit only comes with one cymbal stand, which is the case of the Pearl Roadshow or Ludwig Accent.

This is a beginner set that you’ll surely change in the future, but will definitely be playable for much longer because they’re not likely to break.

Another cool thing that I’ve noticed with my cymbals is that they sound better as they get older, probably because the dirt makes them slightly heavier? Or maybe hitting them so much with the sticks counts as a small re-hammering, but they definitely improve! 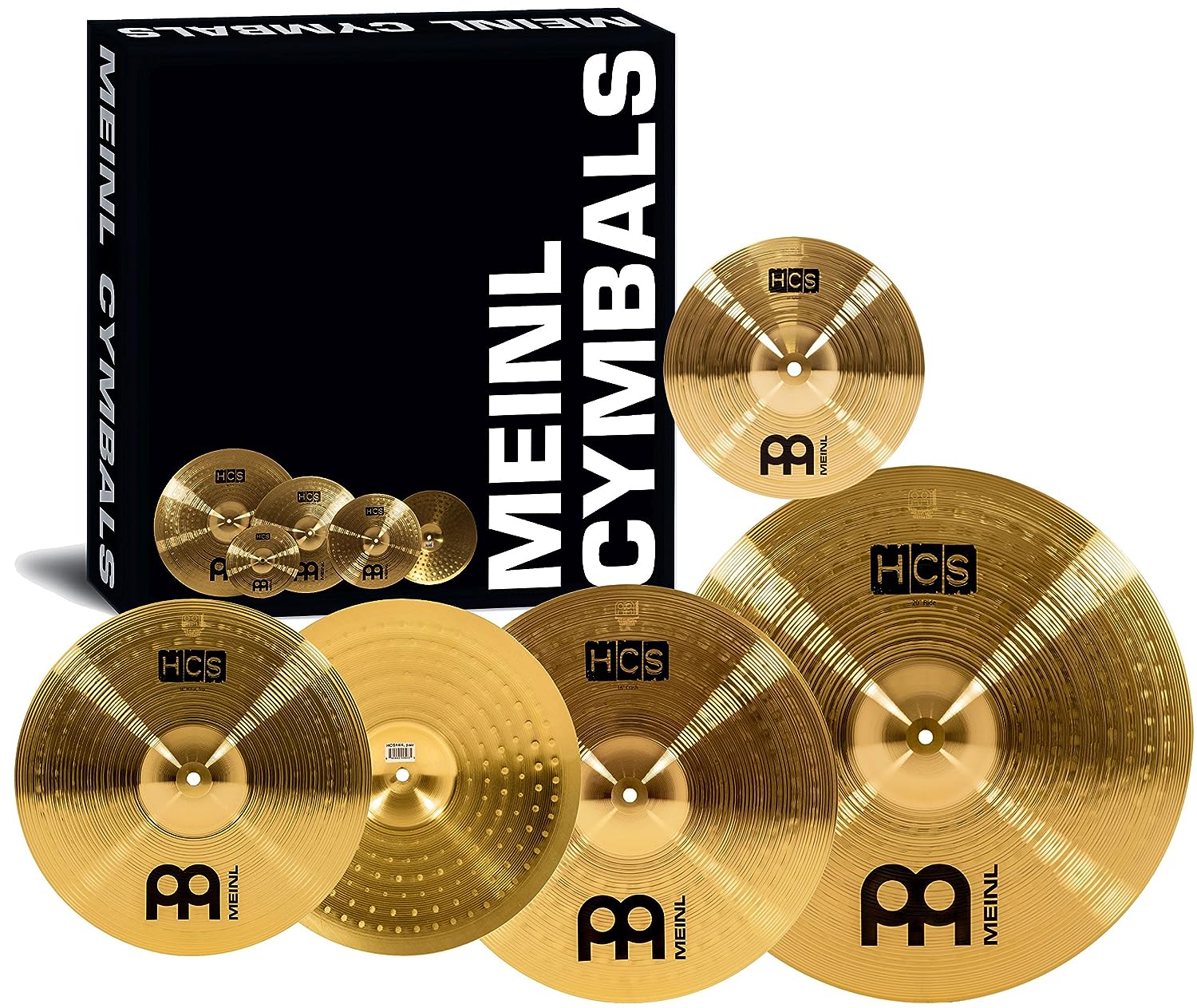 Starting with a good set of cymbals is extremely important, mostly because you can’t tune them like you do with a drum, so the sound you get in the beginning will stay with you for some years. To ensure you get

The hi-hats are warm, and due to the subtle weight difference between the top and the bottom, you get an understandable response when opening and closing. The 20” ride has a nice wash when you hit with the shoulder of the stick, and the bell doesn’t overshadow the sound of the bow, which is quite reasonable in low-end models. And the 16” crash is surprisingly balanced and goes away quickly, leaving some overtones that aren’t inconvenient at all.

Another nice addition is the free 10” splash that comes in the same box, which sounds airy and has minimal overtones, perfect for quick accents. Don’t worry, you won’t need an extra cymbal stand or clamp, just put it upside down on the same stand where you have your crash, and put an extra felt on it to keep both cymbals separated.

With the HCS series, you get the option of expanding your set in the future, since Meinl also offers some cool effect cymbals like a trash crash, a china cymbal or even a 14” stack! These are inexpensive and will blend well with this set since they’re made using the same MS63 alloy.

You shouldn’t expect this pack to sound like a Byzance set, but it still has such a serious sound that even some intermediate drummers use it. It’s undoubtedly a good choice for starting with the right foot. 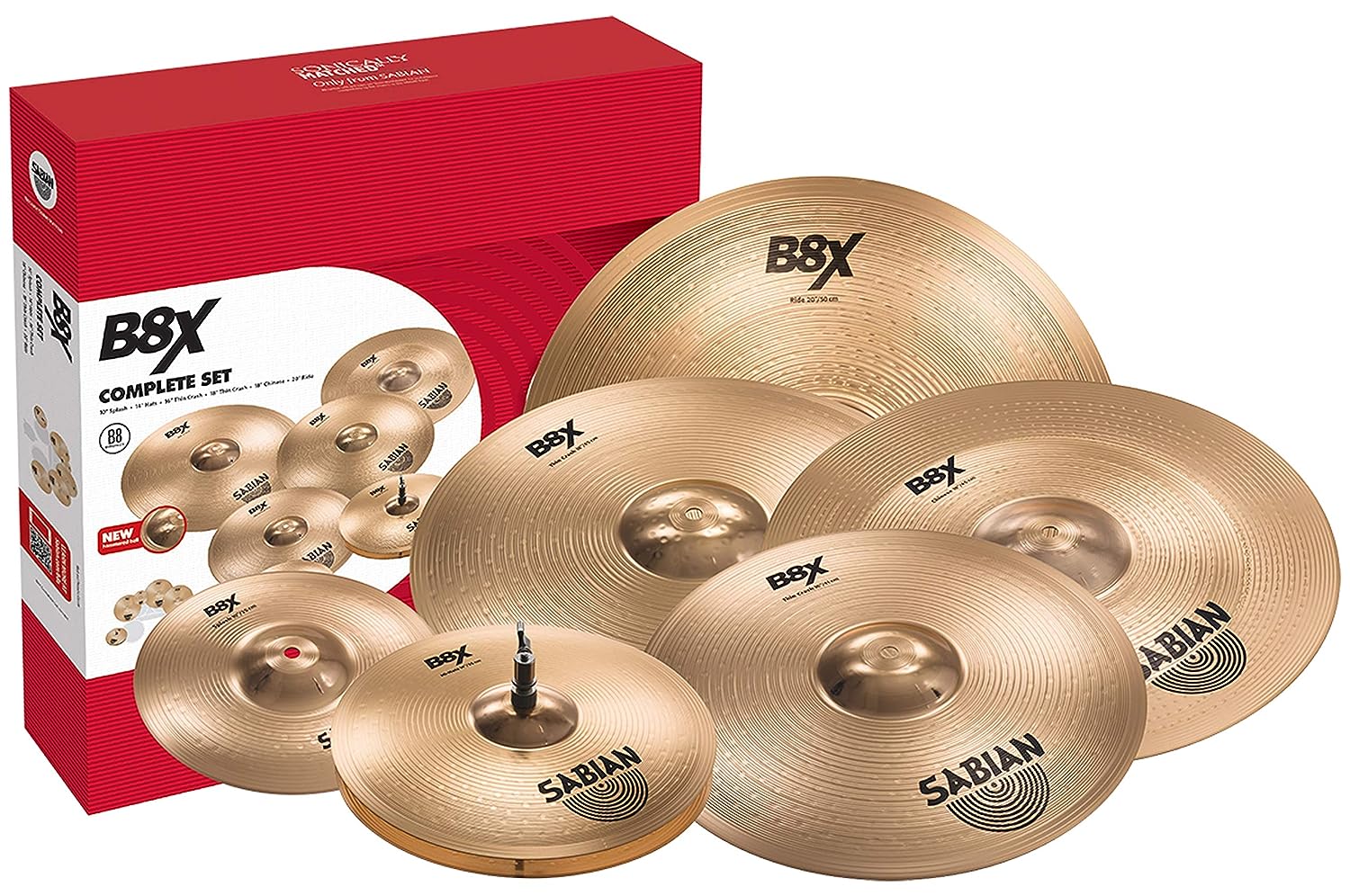 Sabian is known for being one of the most innovative companies in cymbal manufacturing. They’re frequently expanding their catalog and improving their designs, and a few years ago they replaced their B8 and B8Pro series for a new set, which is made of the same metal but comes with some modifications that turn the whole thing around. If your references are Sabian’s previous models, forget about them and take a look at this.

The first thing that you'll notice is the heavier hammering in all the cymbal, and the more brilliant lathing in the bell area, which the previous B8 series didn’t have. This is made to give a more focused sound, like a clearer “ping” when you hit them.

It’s essential to keep in mind that the material from which they’re made, plus the thickness of the cymbals make the B8X series rather high-pitched. They are a great option, but it’s always good to watch different videos before buying the cymbals to know if they match your musical style.

Sabian sells two set options: The Variety package, with an unusual combination of sizes to keep the prices low: 14” hats, 18” crash-ride and a 14” crash that is not for everyone’s taste due to its size. The other one is the performance set, a bigger, more versatile option that comes hi-hat, 20” ride and two crashes, 16” and 18”. 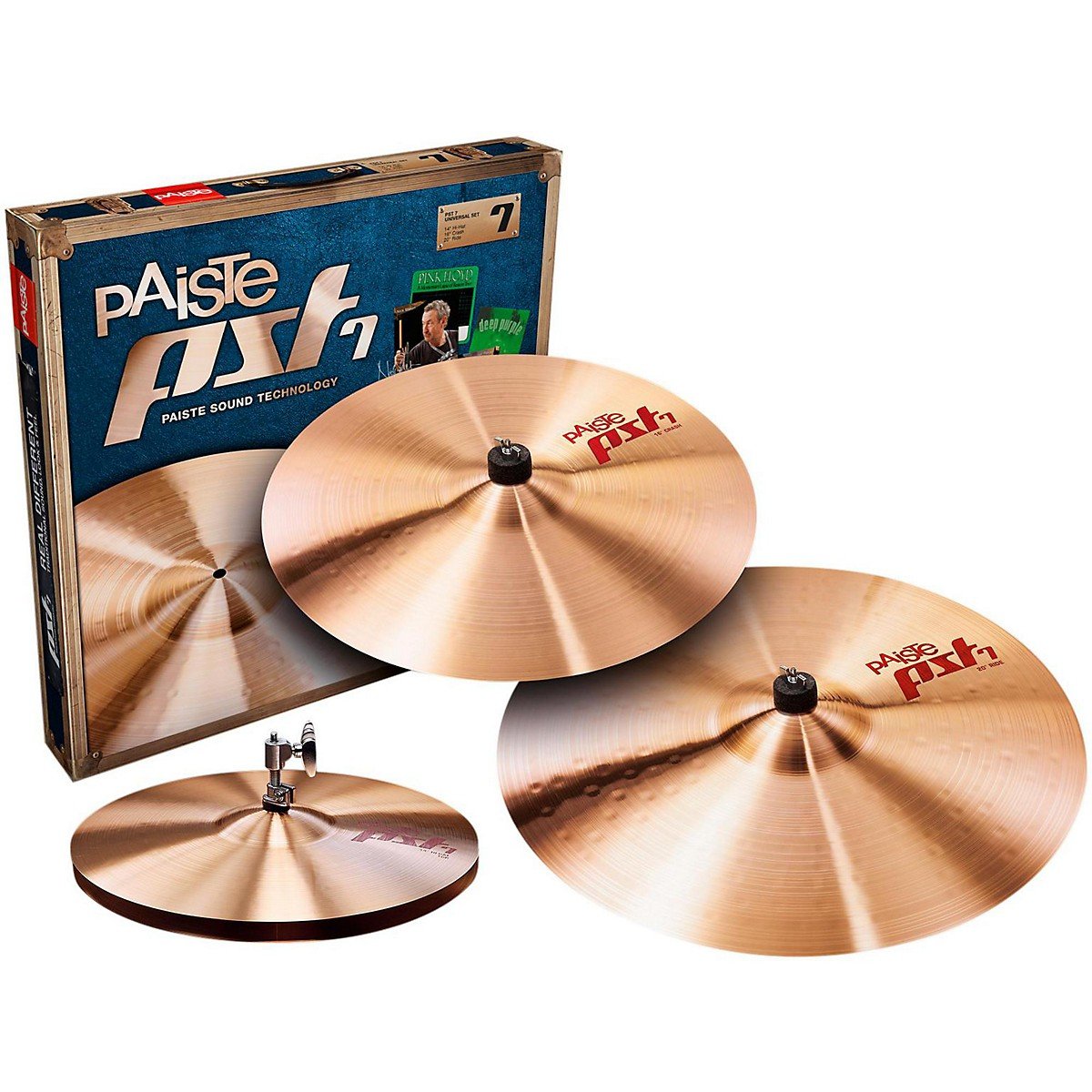 Made of an affordable CuSn8 alloy but crafted like pro cymbals, Paiste made the Pst7 series looking for the best option for the intermediate drummer. This set will give you a clear and airy sound that will never result noisy, and comes in a traditional finish that gives these cymbals a vintage appearance.

Some drummers even compare them to the 2002 series, mainly because both of them use the same metal. There are differences in the manufacturing process, nonetheless. Pst7 cymbals are machine-hammered and have a slightly different profile. They also don’t have as much projection, which is definitely useful for small concerts, though they also work for outdoor performances.

The dynamic capabilities of the Pst7 series are a bit reduced when compared to the 2002, which is a downside for those moments when you want to create that “sshhHHH” atmosphere by hitting the crash cymbal repeatedly. Also, in these models, Paiste seems to have sacrificed power for a cleaner sound.

They feature a straight-forward sound, which prevents them from creating that annoying “mass” of overtones when one of them is left ringing, and you continue playing the others. Some people would still prefer a more complex tone, especially for the ride cymbal.

In summary, this is an excellent choice if you’re an intermediate drummer who isn’t looking for a change in their set in the next years. This is a serious, reliable sound that will respond well in pretty much any situation. 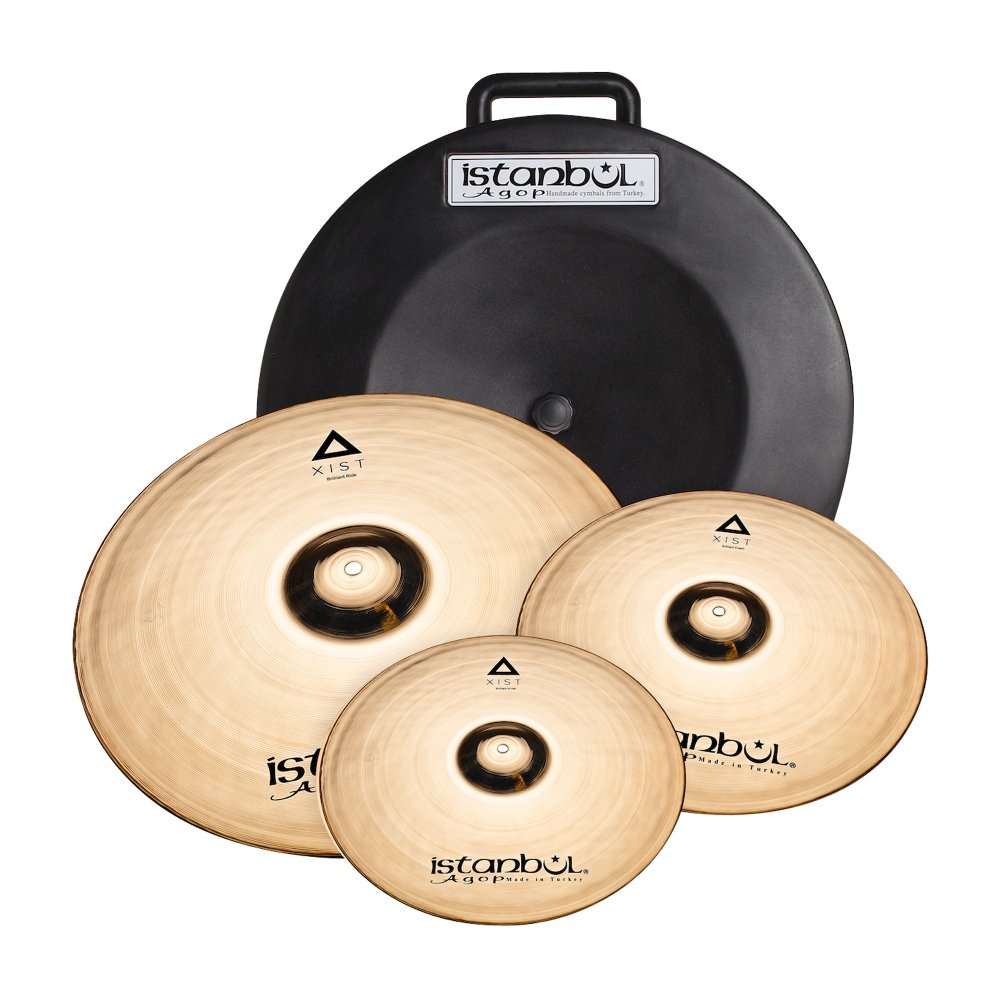 Whether you are looking for your first professional set of cymbals, or already have your own sound that doesn’t match some genres and want a second, more versatile group of cymbals, the Xist series by Istanbul Agop is a super functional choice.

The company Istanbul was made after Zildjian moved their headquarters to the US, and two cymbal masters started crafting their own cymbals. A few years later the company split into two brands: Agop and Mehmet, and until a few years ago Agop was frequently related to jazz due to their smaller variety of finishes and manufacturing processes. This definitely changed with the Xist line, which is mellow AND has a focused attack.

So, how can a B20 set be found at this price? Manufacturing cost is reduced by machine-hammering, and that’s why they have “Made in Turkey” and not “Handmade in Turkey” on their logo. This, however, doesn’t mean that the product has got a lower quality, only that the cymbals will sound brighter since the surface was hammered evenly.

They are less trashy than many cymbals by Istanbul Agop, and they’re so versatile that even a 22” crash works well as a jazz ride! And the ride is “pingy” but still crashable. Some people have even compared these models to the Zildjian Armands. Great news, considering the price difference between both.

The set also includes a hard case that will keep your cymbals from cracking. So, in general, the Xist set offers many advantages that you shouldn’t overlook. 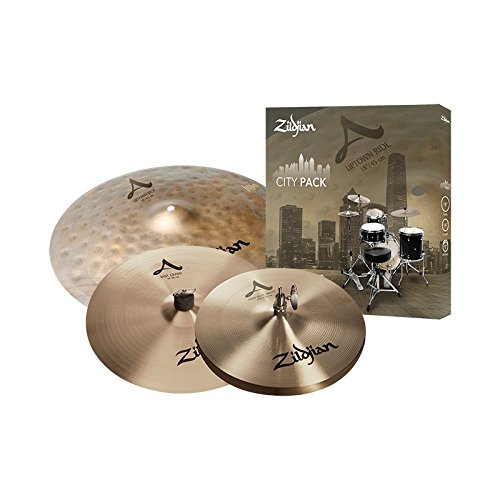 The next product on our list is a high-end set by Zildjian that isn’t so expensive due to the smaller sizes. It’s called the “city pack” because it’s rather quiet and more portable than the average set.

The hi-hats are 12” New Beat, a slightly smaller version of what Buddy Rich used to play.

The crash is not completely normal since we often hear 16”-20” models and this one is 14”. It’s easy to judge it before actually testing it, but it’s surprisingly full for its size and not so splashy. It’s got a nice attack and blends well, but such a small cymbal makes it hard to accentuate the first beats properly. Zildjian could have included at least a 15” or 16,” and it would be perfect.

And an 18” Uptown ride cymbal that is heavily hammered and dry, it’s the kind of cymbal that would get out of the way quickly when you stop playing it. Also, it’s thin enough for a comfortable wash-riding.

In short, even if the crash cymbal is the weak point of the set, this is not due to bad sound or lack of construction quality, but rather about taste. That said, the Zildijan City Pack is a solid, professional set that won’t disappoint anyone and won’t give you trouble when packing your gear for a gig. 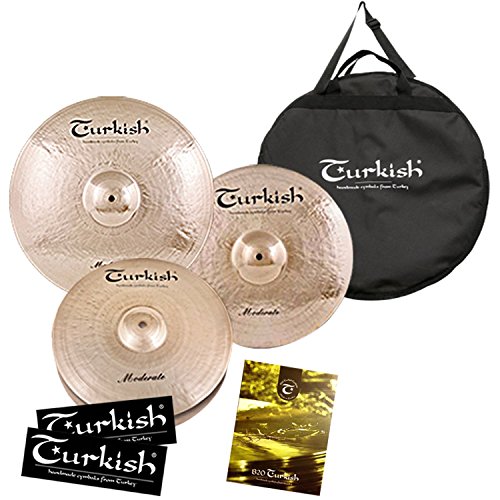 Surprisingly, hand-made cymbals from Turkey don’t have much price difference to those made by machine in North America. The thing is, hand-hammered models by Zildjian, Sabian, or similar brands are way too overpriced. For this reason, you might find this set interesting, in case you’re seeking for one-of-a-kind instruments that feature that special component of being crafted by a person.

Turkish cymbals have a wide range of products for each type of drummer, but for this article, we wanted to talk about the Moderate series, that sound as unique as they look.

The crash cymbal has got a defined attack without being aggressive and also has a good sounding bell that is not too high-pitched. The ride is good but not particularly versatile since it produces some “invasive” overtones that could result unpleasing when playing softer kinds of music. And the hi-hats are precisely the definition of crisp. They have that dry attack when closed tight and would be perfect for playing funk.

Buyer’s guides: What to keep in mind when buying a cymbal set

What’s the difference between low and high-end cymbals?

- Material: The most important metal in cymbal manufacturing is copper. This is always alloyed with other elements such as tin, zinc, and even silver, which changes its sound qualities, and of course, its price. The majority of high-end models are made of B20 bronze, which is basically 20% tin and 80% copper. Some mid-ranged cymbals are made of B8 alloy (8% tin), and the most common material for beginner sets is brass, which instead of tin has got zinc.

- Hammering: Hammering a cymbal makes the sound more complex since it re-shapes the surface, resulting in more overtones. When hammering is machine-made, there’s less sound variation between two cymbals of the same model, but with hand-hammering let’s say you get a “unique sound” since the cymbal master is constantly hearing and modifying the cymbal as he shapes it.

Other characteristics of cymbals

The specifications of a cymbal also change in ways that are not quality-related, but more about the drummer’s individual taste.

- Weight: Light cymbals provide a quick decay, articulate response and darker tone, frequently found in jazz. Heavier models, on the other hand, have more sustain, louder sound and a slower response, which is ideal for rock/metal.

- Lathing: This is the process of removing the outer layers of the cymbal. Lathed models have a more focused sound, and since this process makes them thinner, it gives them more wash.

Buying a set or separately?

The majority of cymbal sets are low to mid-range products, so after a couple of years, you’ll probably want to change them. Instead of selling your old ones and saving for better cymbals you might want to consider buying a used ride and hi-hat (since these are the essentials) that will give you a better sound and that you probably will keep longer.