If you can play with a guitar with P-90 pickups, then you know very well how difficult it is to define the sound of these coils. Aggressive, but with a rounded sound full of nuances and colors. Created by Gibson in its early electric years, they were its queens for a short time, since the new humbucker pickup model was introduced in 1957, which relegated the P-90s to the line of economic models such as the Les Paul ES -3300, Junior, Special and SG Junior and Special. This continued to increase during the 60s and particularly in the early 70s, when the P-90s virtually disappeared from Gibson’s catalog, although they didn't die with it; many manufacturers had chosen this option for some of their instruments: Epiphone, Gretch, Guild and a very long list.The P-90s offered the musicians a special experience between the sharp sound and the cleaner tones, which made them especially appreciated by the guitarists and these companies knew there was a significant demand for guitars with P-90 pickups.

Many brilliant guitarists like Carlos Santana or Pete Townsend played these pickups for a long time. Also David Gilmour used to use a Les Paul Gold Top with P90s pickups in the times of "Another Brick In The Wall",crash course in his blend of versatile chops and burnished sonic sculpting, and an example of how glorious a P-90s sounds. And, who has not seen the brand new Epiphone Casino in John Lennon's hands? At the same time, it became a very habitual pickup on the concerts of the American electric blues, thanks to its great expressiveness and cheap price.
Punk music was also very aware of the guitars with a P-90 in the last 70'sin the last 70’s. Johnny Thunders of The New York Dolls started using the Les Paul Juniors and Les Paul Specials equipped with P-90 due to their sharp saturated sound and their low price, and many punk young guitarists choosed these guitars. Mick Jones from The Clash and Steve Jones from The Sex Pistols used the Les Paul Juniors, and the Double Cutaway Junior.

Today, the P-90s enjoy a relevant position. Many pickups manufacturers have fixed their sight in the excellent sound characteristics of these coils; also, many guitarists from many different backgrounds have chosen this coils because of their clarity, definition and great versatility. At the time, many guitar manufacturers have been betting for more and more years to assemble the P-90 onto their designs. It is no longer unusual to find modern guitars such as Hamer, Yamaha, Ibanez, and so, with brand-new P-90 pickups which gives that very special sound.

Although in essence it is also a single coil and retains, much of the favorable sound characteristics are higher output than a regular single coil and tone "twang", but with more mids. Although the P-90 provides more brightness and transparency than the humbucker, it could be said that it meets some of the output and impedance conditions of it, but with more definition, attack and sensitivity response. Although these are comparisons of the two most common models of the market, this is what the game is really about: some people will tell you they sound more like a single coil, others like a humbucker... Anyway, P-90 characteristics make them shine with their own light; It's just another vibe that will allow you to ride between both sides with a lot of personality.

Best P-90 on the Market Today, 6 Choices Out of Many

(ordered in no particular way)

So: no stacks, no sidewinders, no vertical humbuckers... Just pure, real and the most noise-free P-90s at this side of the Rio Bravo. Come on, Cowboy! 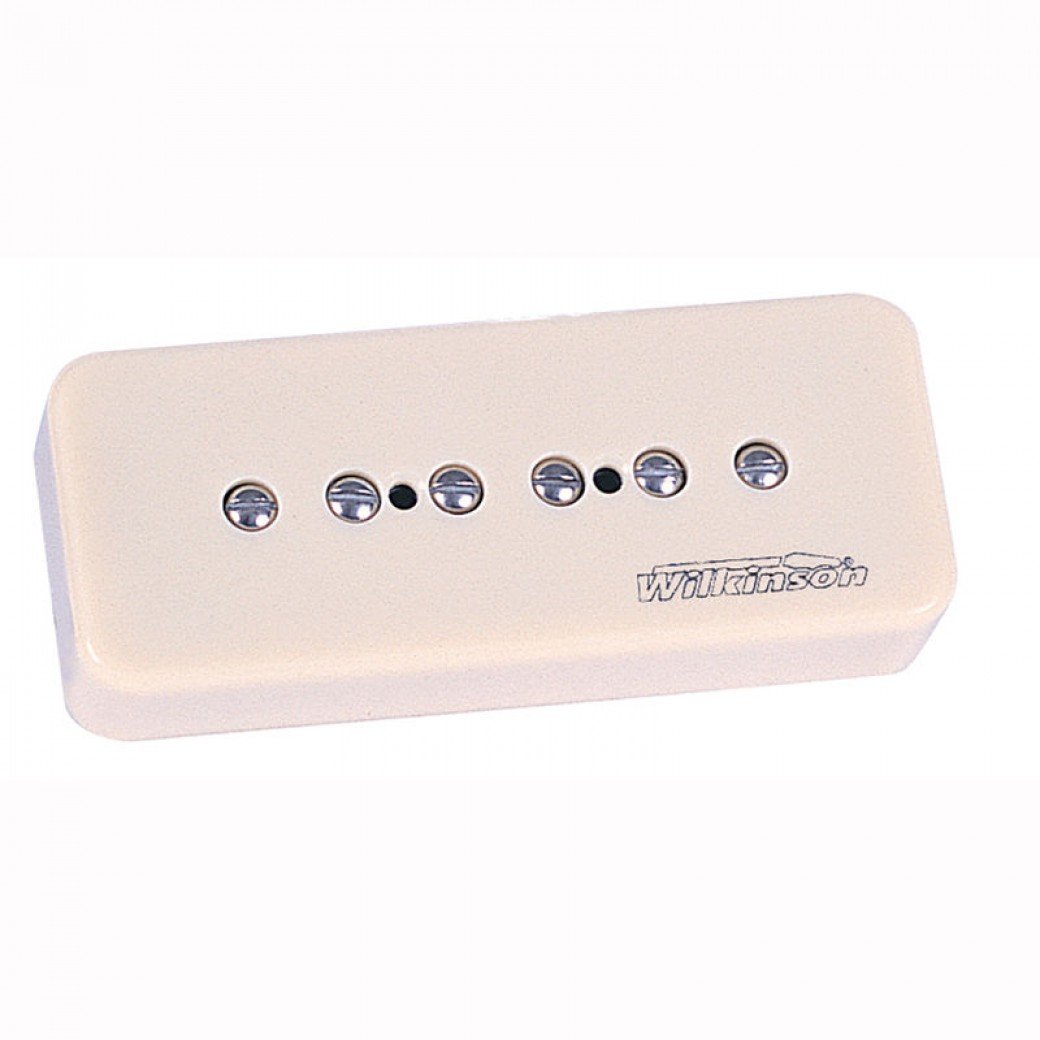 Guru Trev Wilkinson is known by his guitars and spare parts, specializing in vintage quality parts, but without falling into the nostalgia, at an affordable price. The W90B is a soapbar with Alnico V magnets that offers more than a correct sound in the clean channel, but where it really says "all in" is with saturation and distortions, with low solid notes and not tubby while high notes are fat all the way up the neck. It will give you fat, growling chords full of rich midrange harmonics. The W90B really emphasize your pick attack against the strings, and keeps even the high gain sounds nice and defined. 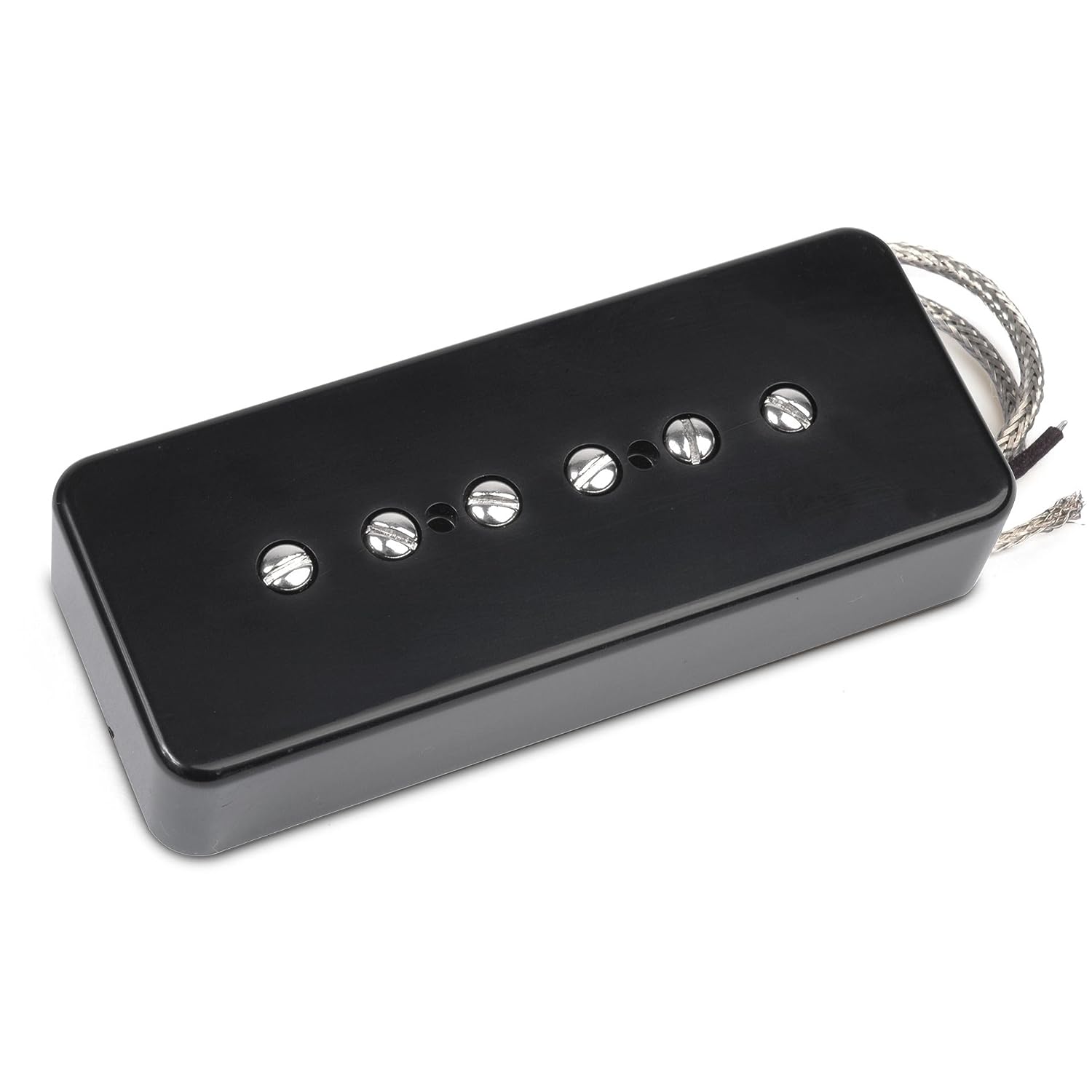 Also in the line of the economic soapbar we find the guys from StewMc and their Golden Age. The name of this model is a reminder that evokes the street of Kalamazoo where the first P-90s were created. Its sound brings us closer to many of the old electric blues recordings, although we can also use it with a good amount of distortion. A pickup with a very marked warm and a surprising definition. It features a black plastic bobbin with old-style enameled unpotted coil wire for the original slightly grittier sound, high notes are always fat, with just enough bite to cut through the mix. Low notes are bright, but not thin, and the tone stays even. 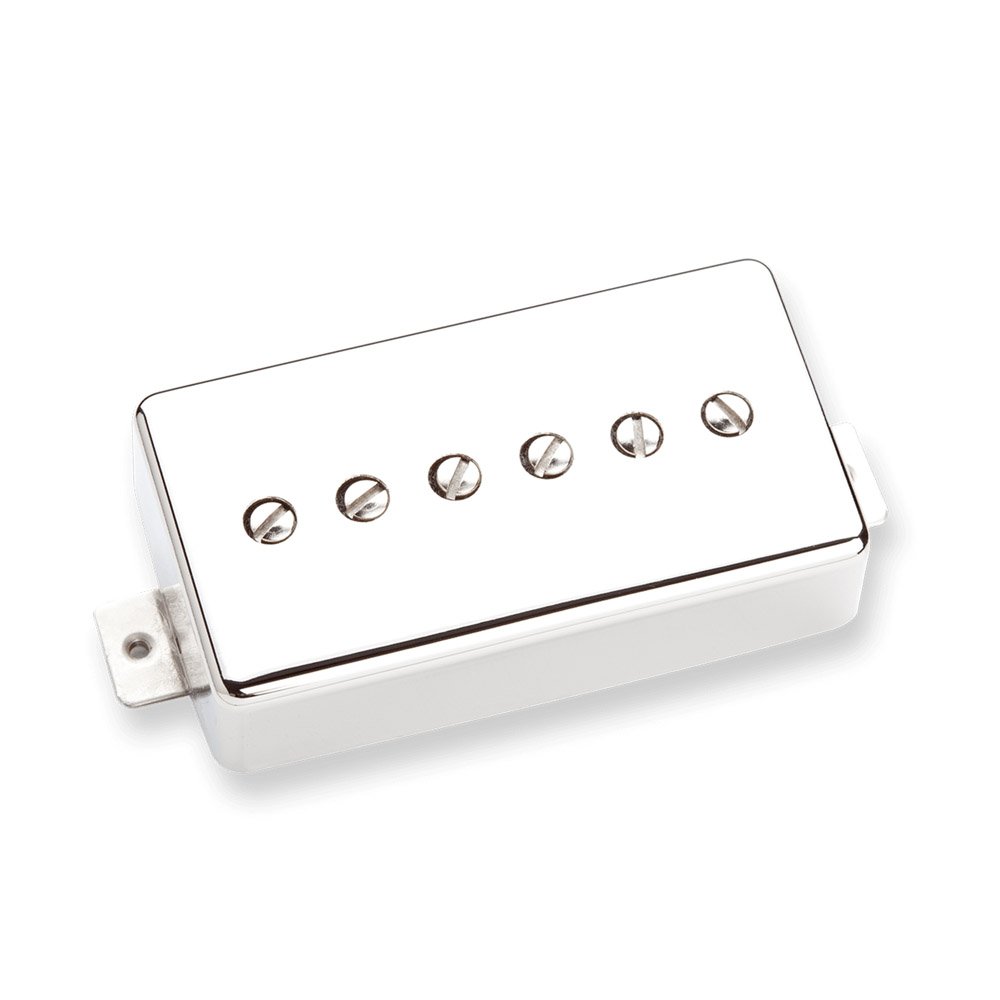 Pickup’s wizards of Santa Barbara have a large catalog and obviously they could not forget about P-90s. If you do not want to modify your guitar body and you are looking for a Casing humbucker this needs to be your first alternative, 'cause the Phat Cat is a true single-coil P-90 Soapbar that fits under a humbucker cover and drops into humbucker-equipped guitars. This pickup model was originally created at the request of Hamer Guitars and therefore was developed at Seymour Duncan Custom Shop; then the demand became so high they moved to regular production. Grit and growl that you'd expect from a vintage P90 Soapbar and the chords have bright and ringing harmonic overtones while the solos have a classic cut and edge. Chords have lots of rich harmonics, and solos have that unique single coil springiness. It uses two Alnico 2 bar magnets for more sustain and softer attack. And, the metal covers provide more shielding and noise reduction than standard soapbar covers. 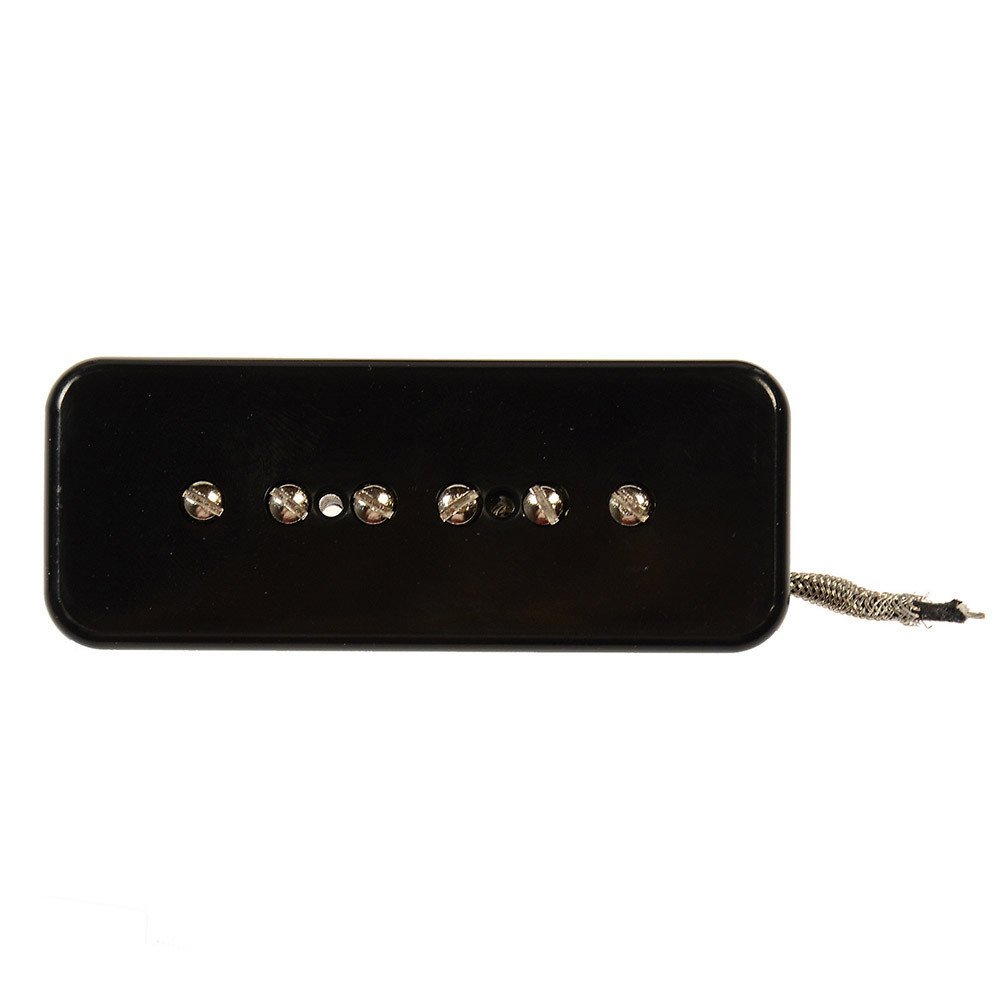 Since the beginning of this century the English brand Bare Knuckle surprised us with pickups ranging from original vintage models through to contemporary pickups. The Nantucket it's made with Alnico V and the tone is raw and in-your-face, remembering the 70's tone. Low notes are solid and tight while the upper mids really grind, but they do not sound harsh; just chunky. High notes can really sing with a wonderful harmonic feedback. greater sustain, and more overall sensitivity. This pickup has a pronounced upper midrange that will make chords sound mean and full, and solos sound fat and cutting. The Nantucket really does lend itself to a huge range of playing styles. 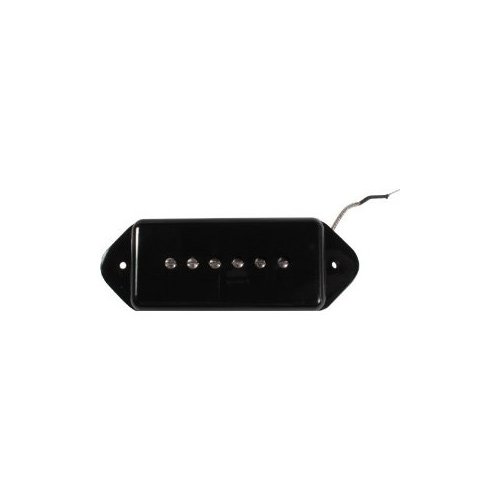 Everyone knows how great the virginian Lindy Fralin pickups are. The Fralin Hum-Cancelling P-90 is pure tone without hum. Available in both soapbar and dogear with the same tonal and quality characteristics, sounds really wonderful, creamy and bright. Perfect balance that makes you travel to the sounds of blues and country-redneck, even to the old original jazz guitar school. At the same time, its non-hum system makes it a very good option with a lot of distortion, and a touch full of nuance, sensitivity and attack. 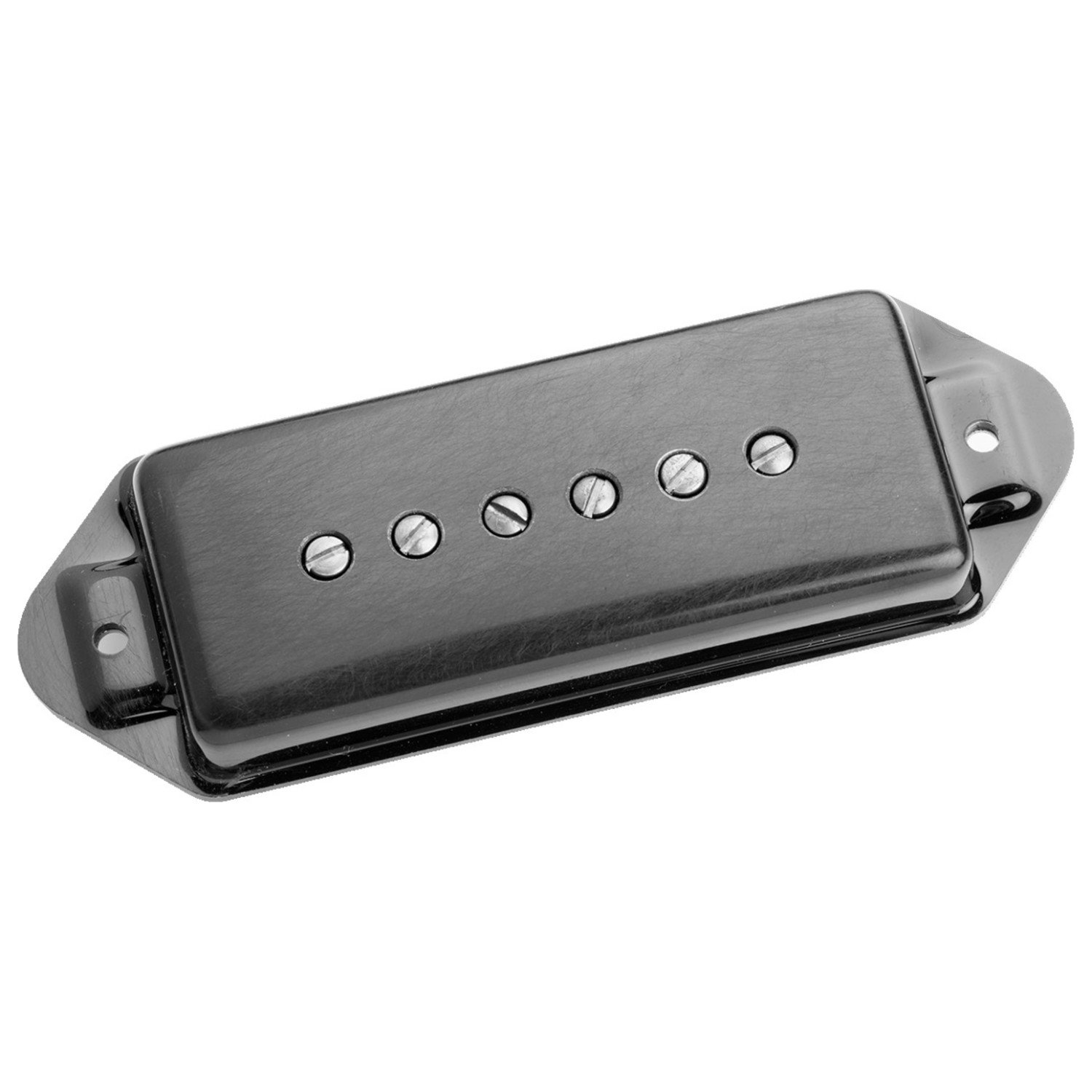 Before going on, we have to make a stop to clear something out about P-90, since not all of them have the same cover type. The most common two are the "Soapbox" and the "Eardog", as well as a third one looking almost identical to the humbucker, known as "Humbucker Casing".

- Dogear: is very similar to the soapbar, but with extensions on both sides of the pickup to fix the screws, which someway resembles to the ears of a dog. Although the technical and operational characteristics of these are the same as the soapbars, they used to be mounted on Gibson hollow-body guitars such as the ES-330, and sometimes on solid-body models such as the Les Paul Junior. They are the most striking aesthetically P-90, no doubt.

- Humbucker Casing: being wider than a regular single coil but narrower and longer than a humbucker, the P-90 require modifications on the pickups hollows to be installed. This is something that could be scary because of it's laboriousness and risks taking. Fortunately, for some time we have the option of a P-90 with the cover of a humbucker, which is possibly the best option if you don't want to modify the look and physical characteristics of your guitar.

These are some of the P-90 that you can currently find in the replacement market. You’ll find more economic options and more expensive ones, but always maintaining a good quality... or making it better. If you have inquired a little about the P-90 some of them will be familiar, but it is very possible that you will are surprised. Whatever your budget and music is, you will find what you are looking for here.

There are other important points that have been observed when making this list. First, these pickups will sound and really work like a P-90 and not only look like it. There's nothing about "erratic cosmetic criteria" that hide pickups which really works and sounds that different from a real P-90. This is only Kalamazoo's 100% pure sound, and we love it!

And another important detail on which I have paid significant attention; a negative aspect of the P-90 pickups is their susceptibility to produce humming at 50 Hz / 60 Hz induced by external electromagnetic fields caused by appliances, motors, fluorescent lamps, current transformers, etc. This susceptibility is common to all single-coil pickups, but P-90s, with around 2,000 more turns of copper wire in their coils than a normal Fender, produce more buzz than a "usual" pickup. Several manufacturers produce pickups with a similar design to the P-90 that cancel the buzz, but I wanted to avoid this because that's not what we are looking for. The truth is an intelligent circuit with good components can help you avoid these problems, but I wanted the P-90s named here to be as less noisy as possible.

And, at the end, what will happen with your brand new best P-90 pickups, you will sound thicker, darker and more aggressive. You can expect a fat, round bottom-end, and a rounder, less aggressive top-end, with a clear, fat midrange in-between. The P-90’s still have that undeniable thick Single-Coil tone that we all love. Single notes have a punchy, thick sonic footprint and great sustain. Chords break up nicely with a slight compression and extraordinary note separation. The Output is bigger than on a single coil pickup and a little less than on a classic humbucker but thicker in the midrange. A P-90 offer undeniable clarity and definition while remaining strong, fat, thick, and punchy. Whether you play blues, classic rock, jazz, countrý, funk, pop, indie... or even punk music! You can be sure of this: the sound of the P-90 will not disappoint you, neither will its deep musicality.